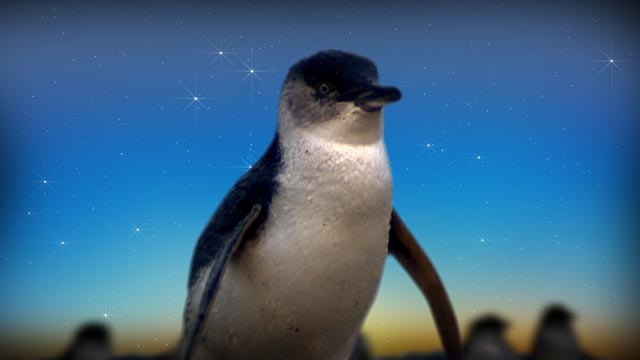 The world famous Little Penguins of Australia’s Phillip Island entertain half a million tourists a year with a sunset parade from the surf to their burrows. But behind the scenes, the penguins’ lives are even more interesting.

Penguin Island uses the latest underwater satellite tracking and Big Brother-style video surveillance to tell the story of several penguin families who live in a colony where relationships are fraught and survival is tenuous.

Over six 30-minute episodes, Penguin Island follows the penguins as a dedicated team of rangers and scientists monitor and protect them through the breeding season.

Filmed over a year by some of Australia’s best documentary filmmakers, including series producer Sally Ingleton, director Simon Target, and wildlife cinematographer David Parer, Penguin Island offers a rewarding insight into the lives of the stars of Phillip Island’s internationally renowned Penguin Parade.

We meet Rocky, the unlucky-in-love Romeo who lives behind the tourist café, and his neighbour and sometime competitor, the dim-witted, debonair Spike. Nearby live the long-time couple Bluey and Sheila, who are struggling to feed chicks Sammy and Tom. And tearaway teenagers Butch and Bruiser, whose thuggish behaviour upsets the neighbours.

Penguin Island opens in the Australian spring as 26,000 Little Penguins return to their Phillip Island colony after many weeks at sea. While some search for loyal partners and others seek out a new mate, the penguins set to work building and renovating their nests to keep them safe from predators.

Soon the colony is full of chicks and penguin parents take turns to babysit while their partner goes to sea to hunt. With only eight short weeks before the chicks must learn to survive for themselves, it is a fraught and time-consuming business.

So when the fish disappear from the waters around Phillip Island, life in the colony gets tough and the battle for survival begins. To make matters worse, Phillip Island is experiencing the hottest summer on record and the rangers and carers must rescue penguins all across the colony.

Episode One – Love is in the Air
In episode one of Penguin Island we meet Bluey and Sheila, one of the 13,000 little penguin couples who live on Phillip Island, as they begin their annual breeding cycle, and the dedicated team of rangers and scientists who will monitor and protect them through the hottest summer on record.

Episode Two – Danger in the Penguin Colony
Long-time penguin couple Bluey and Sheila are struggling to feed their hungry chicks, Sammy and Tom and protect them from predatory gulls, domestic pets and a feral fox, which is stalking the colony.

Episode Three – Where Have all the Fish Gone?
Time is running out for hungry penguin chicks Sammy and Tom, whose parents Bluey and Sheila must swim further and further to sea in a desperate attempt to find fish. As the weather heats up, chicks are dying of starvation throughout the colony and the harsh reality of nature is revealed.

Episode Four – A Heatwave hits the Colony
A punishing heatwave hits the island, bushfires are raging around the state and penguins are collapsing from heat, hunger and exhaustion. As the animal hospital fills with overheated wildlife, rangers work to rehydrate and cool the Little Penguins in a battle to save their lives.

Episode Five – Rocky Finds Love at Last
Unlucky-in-love Rocky finally finds a mate in Jess, whose previous clutch of chicks has died. But it is very late in the season to be raising chicks before the Little Penguins’ annual moult prevents them going to sea. And new technology reveals just what Little Penguins get up to underwater.

Episode Six – Summer Ends on Phillip Island
In the final episode of Penguin Island, Rocky and Jess’s surviving chick Tilda is not yet big enough to feed herself and is anxiously awaiting the return of her parents. But time is running out as penguins around the island begin to moult.